Delicious and fluffy Homemade Cinnamon Rolls topped with a cream cheese frosting, then filled with a cinnamon, brown sugar, and pecan filling. This quick and easy recipe will become your favorite dessert after the first bite!

If you enjoy fluffy yeast bread with a sweet filling, then you will love this Nutella Brioche and Brioche hot cross buns!

A lot of people love Cinnabon, but I think this recipe is even better! These homemade Cinnamon Rolls are absolutely scrumptious.

For the Cinnamon Rolls

For the Cream Cheese Frosting

How to Make the Best Homemade Cinnamon Rolls

This is a quick recipe rundown. For the full detailed recipe, scroll down to the printable recipe card.

Pro Tip: When it comes to cutting the rolls, I prefer a thread over a knife since it gives a cleaner cut. Slide the string or thread under the roll, then wrap around and pull and cut through the dough.

How do you make overnight Cinnamon Rolls?

Make the dough the day before you need them. After you spread on the cinnamon and pecan filling, roll the dough and cut them into individual pieces. Then place them into a baking dish and refrigerate until the next morning. Let them come to room temperature before you bake them.

Can you freeze the cream cheese icing?

Yes, the icing can be frozen for up to 3 months. Just allow it to thaw in the refrigerator, then let it sit out until it comes to room temperature before spreading it on the Cinnamon Rolls.

These Cinnamon Rolls make a great dessert, snack, or breakfast. Here are some ways you can serve them.

Make ahead: Yes. You can make these rolls the day before but don’t bake them. Place them in the fridge overnight and bake the next day. You don’t want to have them sit longer than that. The dough will continue to rise and the yeast can go bad.

Storing: Store leftover Homemade Cinnamon Rolls covered at room temperature for up to 2 days, and up to 5 days in the refrigerator.

Freeze: Make sure to cover your Homemade Cinnamon Rolls really well. They can last up to 2 months in the freezer. Prior to baking them, you will want to allow them to thaw in the fridge. Then once they are thawed out, you can bake them.

Love this recipe? Please leave a 5 star ⭐️⭐️⭐️⭐️⭐️ rating in the recipe card below ⬇️ and/or a review in the comment section further down. 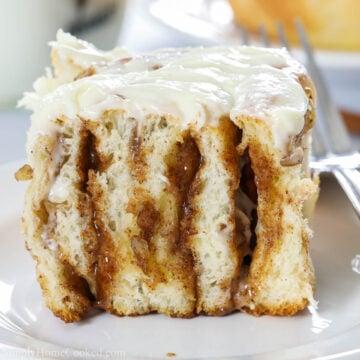 This recipe was originally published on Nov 9, 2015, we have tweaked it a bit since.

Follow me
Dina
Hi, I’m Dina, so glad you stopped by! I believe life is too short for bad coffee and boring meals. With my easy to follow step-by-step recipes, you’ll be surprised at how quickly a wholesome and delicious meal can come together. I hope you find something you enjoy!

This site uses Akismet to reduce spam. Learn how your comment data is processed.

Hi, I'm Dina, so glad you stopped by! I believe life is too short for bad coffee and boring meals. With my easy to follow step-by-step recipes, you'll be surprised at how quickly a wholesome and delicious meal can come together. I hope you find something you enjoy!